Last week, MSFS hosted key figures involved in researching and addressing the crisis in Venezuela including Secretary of the OAS, Luis Almagro, U.S. Ambassador to Venezuela, Jamese Story, Ambassador of Venezuela to the U.S., Carlos Vecchio, and Dr. Fabiana Perera from the William J. Perry Center for Hemispheric Defense Studies. Our esteemed presenters drew on their extensive experience and expertise to address the most pressing questions surrounding Venezuela, including how we can negotiate with the Maduro Regime and how to address the humanitarian crises.

With more than 94% of the population living in poverty, and plagued by widespread violence, economic turmoil, crimes against humanity, political instability, food and medical care shortages, and a collapse of the educational system, Venezuela is in crisis.

The presenters shared their own assessments of the situation based on their unique backgrounds. Much of the discussion centered around the humanitarian crisis, shining light on the refugee crisis in Venezuela, which has been described as the second-largest displacement crisis in the world with an estimated 7.1 million people forcibly displaced. It has been reported as the most underfunded refugee crisis in the world.

Secretary General Almagro, began expressing how Venezuela it is essential to focus in solving the Venezuelan crisis as a consequence of the worst man-made disaster in the history of the Americas.  He expressed the important role that Venezuela plays for its geographic location, vast natural resources, and geopolitical influence. Almagro described the effort done by the OAS over the last years to help migrants and find a political solution. He mentioned that compromise will be necessary to find a solution, but after many years of maximum pressure it is necessary to think about new ideas and methods.

Dr. Fabiana Perera –who holds a M.A. in Latin American studies from Georgetown– stressed why Venezuela is a vital focus of US attention as for democracy, energy, security, and humanitarian reasons. On America’s backdoor, the stability of political institutions in Venezuela can have reverberating repercussions for the success of democracies around the world, and particularly those in the Americas.

Venezuelan Ambassador to the U.S., the honorary Carlos Vecchio—who has an LLM degreea from Georgetown’s Law Center—expressed that the only way for Venezuelans to be free and recover their wellbeing is ending with the Maduro’s dictatorship. A democratic transition is urgently needed. Lowering the cost of exit in a negotiation and lifting all sanctions at the negotiating table in Mexico does not guarantee that Maduro will leave. The necessity for protection & humanitarian support for Venezuelan refugees & migrants is paramount.

U.S. Ambassador to Venezuela, James Story–an MSFS alum–described the efforts the United States has been making to incentivize a solution to the crisis. Story said that the U.S. works to promote fair and free elections to facilitate a transition to democracy. He also mentioned that the U.S. has contributed more than $2.7 billion in total humanitarian, development, economic, and health assistance for the crisis.

Following an hour of engaging discussion and Q&A with students from the university as well as around the world, the panelists were invited to a luncheon with students and members of the MSFS community. Students had the opportunity to engage one-on-one with the panelists and their teams to raise new questions and learn about their experiences as practitioners. A group of MSFS students mentioned that the event sparked a strong interest to learn, write, and get involved with the Venezuela situation.

MSFS student Rafael presented Ambassador Vecchio with a recognition in honor of his effort for serving Venezuelans and towards finding a solution to the crisis. Rafael also acknowledged Ambassador Vecchio’s warm welcome and help to Rafael went into exile and fled to the US in 2017.

Organized by MSFS 2nd year Carlos Chacon, the event was attended by over 80 people from across the Georgetown community, and students other academic institutions. Carlos, who is a Venezuelan-American himself, stressed the importance of raising awareness of the situation in Venezuela saying “As a Venezuelan-American, I live between both worlds. it’s my duty to address take action to help Venezuelans. I also find essential the need to inform Americans about the crisis and how important it is for us, not only for humanitarian reasons but also for security threats, and destiny of democracy in the Americas.” 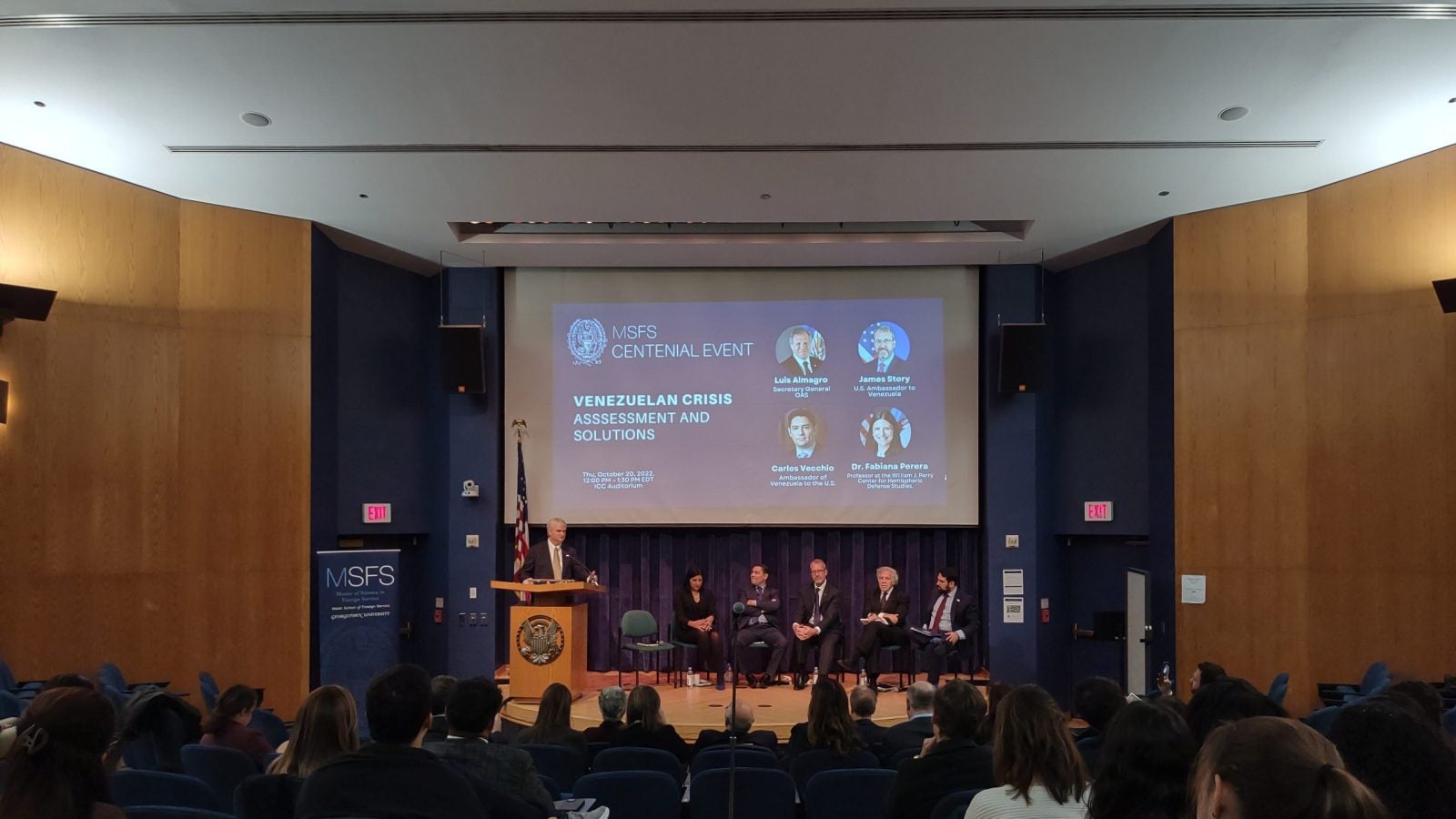 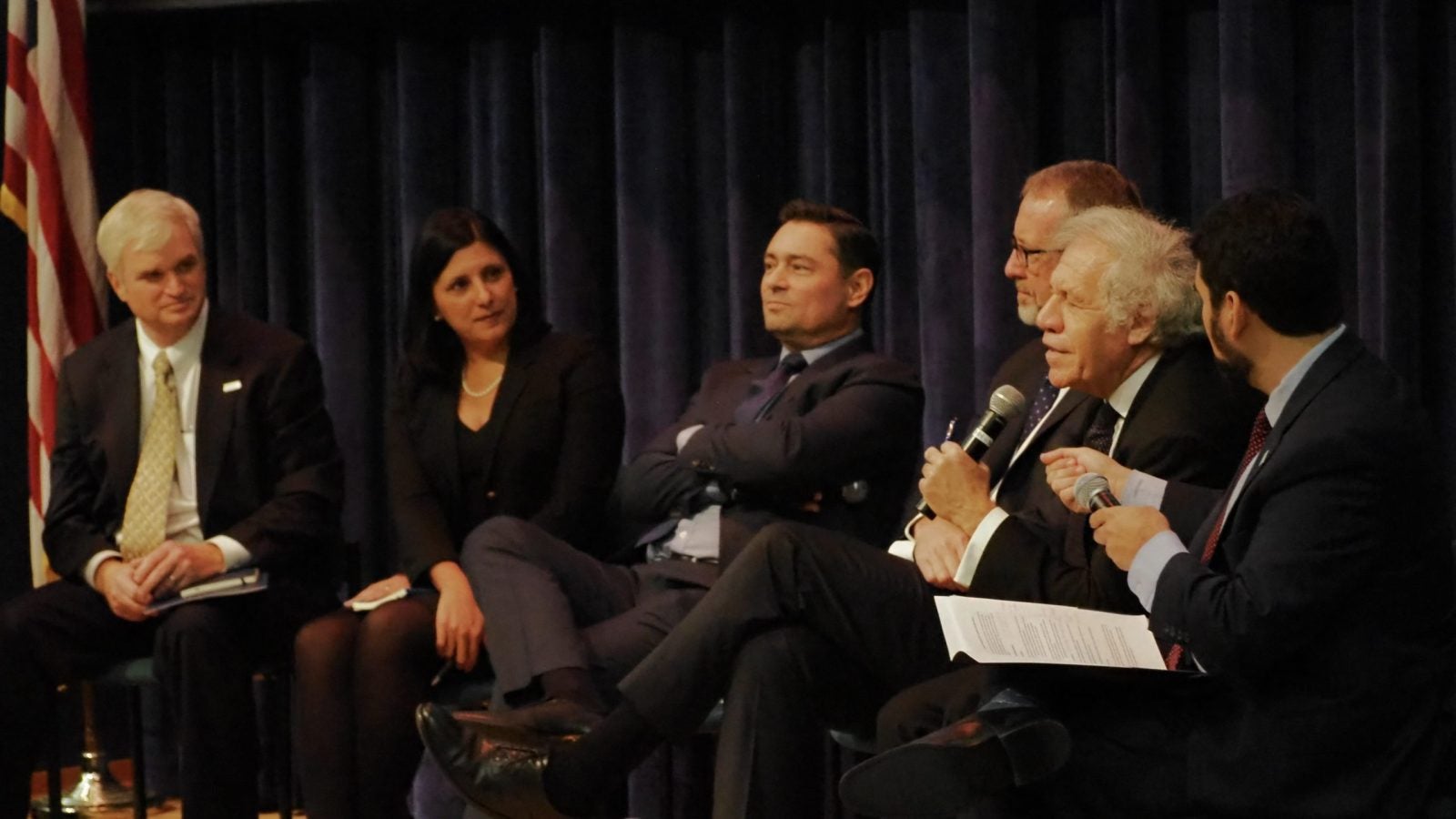 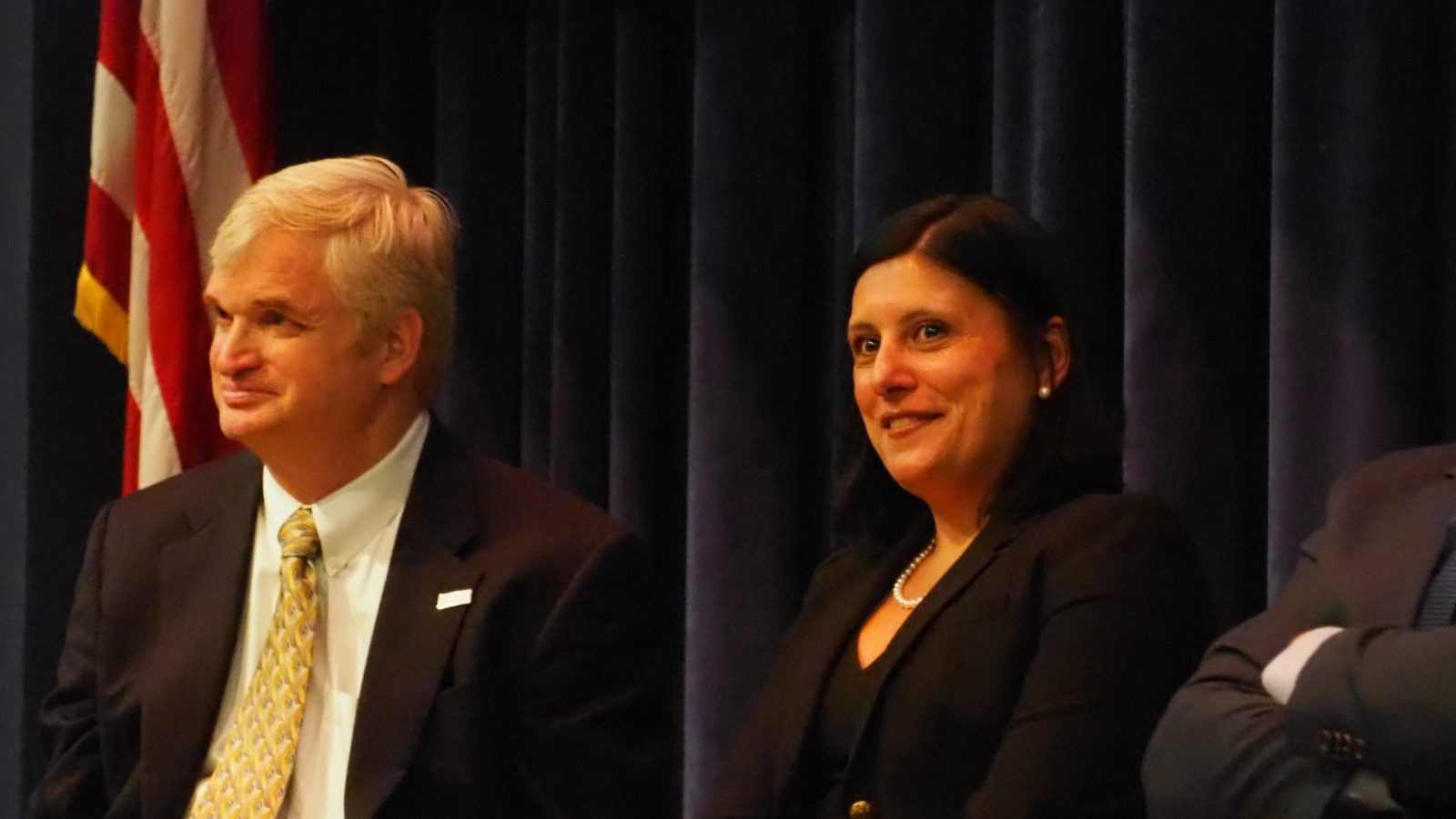 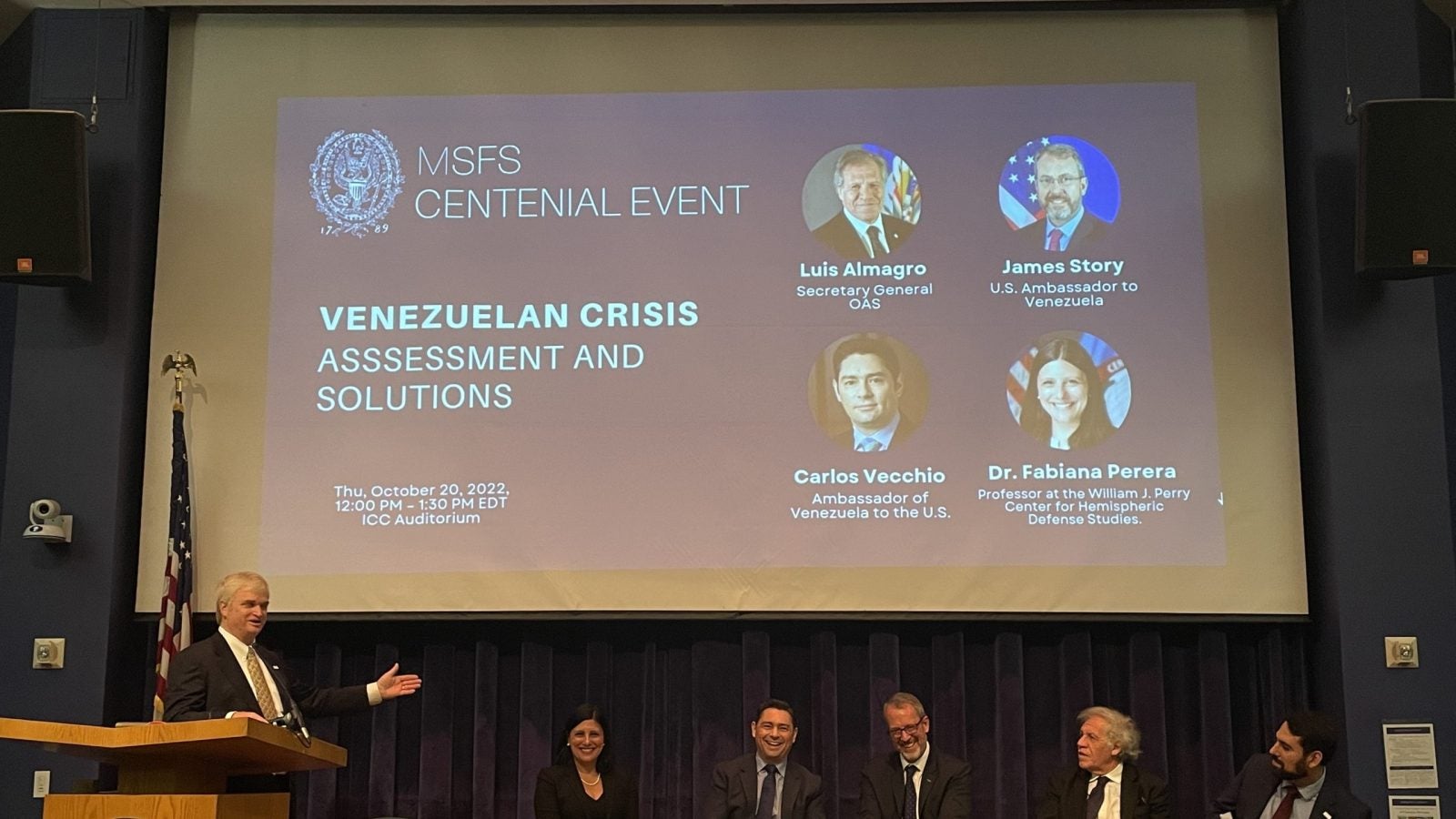 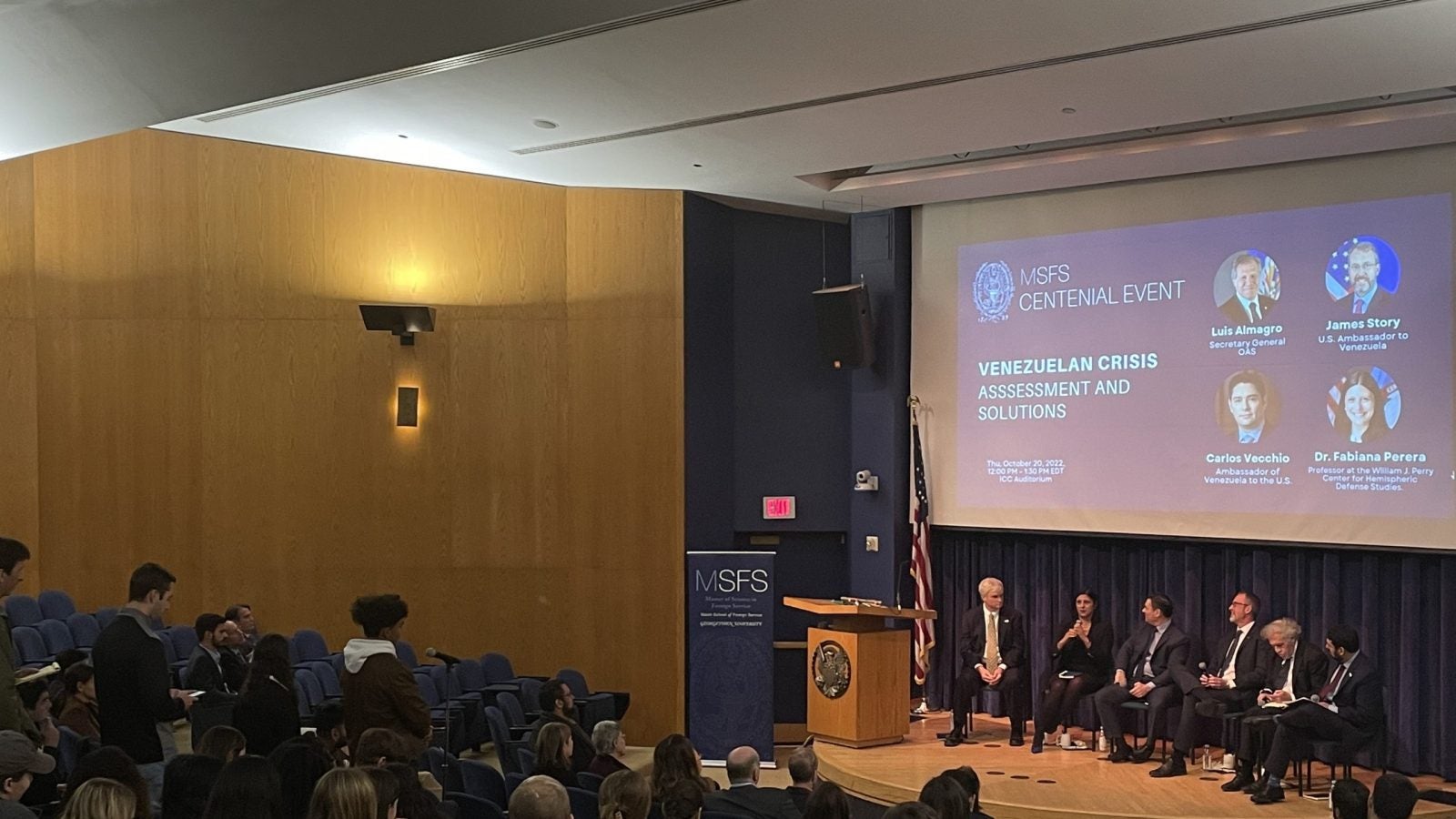 MSFS was honored to have a distinguished panel come discuss the crisis in Venezuela.

Director Shambaugh thanking the panelists for their time and contributions.