To celebrate International Women’s Day on March 8th, all this week MSFS is highlighting women in our program’s community who strive to further gender equality and inclusion in their professional and personal lives. In our penultimate spotlight of the series, we interviewed two MSFS alumni, Professor Nicole Bibbins Sedaca (MSFS ‘97), who is a faculty member and Co-Chair of the Global Politics and Security concentration at MSFS, and Radhika Prabhu (MSFS ‘09) who currently serves as Executive Director of the U.S.-Pakistan Women’s Council at the State Department. They talked to us about their careers after MSFS and how they approach issues relating to gender in their professional lives. 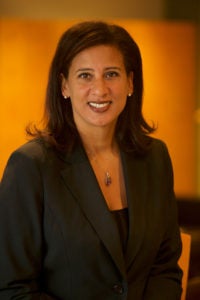 Professor Nicole Bibbins Sedaca serves as the Co-Chair for the Global Politics and Security Concentration and a Professor in the Practice of International Affairs in the MSFS program. She is also an MSFS alumna, graduating from the program in 1997. Prof. Bibbins Sedaca has held numerous positions in the public and non-governmental sectors in the United States and Ecuador. She served for ten years in the United States Department of State. During this time, her positions included: the Senior Advisor to the Under Secretary of State for Democracy and Global Affairs, the Senior Director for Strategic Planning and External Affairs in the Bureau of Democracy, Human Rights and Labor, and the Special Assistant to the Ambassador-At-Large for Counterterrorism. Following her governmental service, she opened and directed the International Republican Institute’s local governance program in Ecuador. She also taught at the Universidad de San Francisco de Quito (Ecuador) on democratization and conflict resolution. Prior to returning to Georgetown full-time, she served as the Director of the Washington Office of Independent Diplomat, a diplomatic advisory group.

Can you describe what your experience has been as a woman in your field?

Depending on the sector and issue area on which I was working, I was often the only woman—and certainly woman of color—at the table. However, the amazing women who went before me have been a great example of how to navigate these situations. There is far more awareness now about the obstacles and challenges women face in the workplace. Just the awareness and openness to name these obstacles has been helpful for women. We have a long way to go to correct these issues, but the trajectory is pointed in the right direction.

How has the role of women in the field of global politics and security/ international affairs changed over the years?

There are significantly more women in leadership roles than there were previously. I was fortunate to start my government service under Secretary Albright and then serve under Secretary Rice, as well. (I served under Sec. Powell in between.) Seeing these role models gave many of us encouragement that barriers were being broken and that the leadership of American foreign policy would look more like the country it represented.

Can you talk about ways you have felt supported or empowered as a woman professionally?

I have been extremely fortunate to have a series of really amazing bosses—mostly women but also some great men—who always empowered and encouraged me. They were constantly encouraging me and willing to point out how I could improve. I seek to follow their example by encouraging, mentoring, and guiding the young women professionals I encounter.

In your opinion, what are the most important ways we can empower women to ensure gender equality globally today?

Policy makers and programmatic experts have to ensure that women are always at the table, in the conversation, in the power structure, and in the client base. Exclusion of women from all elements of policy and program work means that you are only considering a portion of the thinking, the needs, and the viewpoints. It is not only the right thing to do, it is the wise thing to do.

Do you have a message for women who are interested in pursuing a similar career path to yours?

Believe in yourself. We tend to listen more to a person who wants to discourage us or to that nagging little voice whispering to us that we don’t belong. We need to listen to our mentors, colleagues, and supporters who are willing to reflect back to you your strengths and abilities. Surround yourself with honest, supportive, tough women who are willing to encourage you, challenge you, speak truthfully to you, and support you. When I have a room full of graduate student women, I ask them to say something about the woman next to them. They can easily rave—very honestly—about their colleagues’ strengths and talents. And yet, when asked to give an honest assessment of themselves, many women find it hard to embrace their strengths and talents. The best thing we can do for ourselves is embracing fully and honestly the strengths we have, and name gracefully and humbly the weaknesses we have, while not dwelling on the latter at the expense of the former. 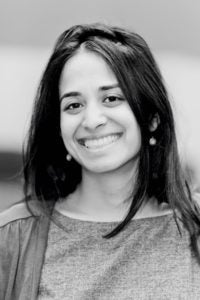 Radhika Prabhu works at the intersection of human rights, inclusive security, and U.S. foreign policy. Currently the Executive Director of the U.S.-Pakistan Women’s Council at the State Department, she previously served as a senior policy advisor to the U.S. Ambassador-at-Large for Global Women’s Issues on U.S. foreign policy in South Asia. Radhika has held positions at the World Bank, Inter-American Development Bank, and United Nations Development Program. She is a certified meditation instructor with the Art of Living Foundation and senior youth instructor for the International Association for Human Values.

In your work at the U.S.-Pakistan Women’s Council, you empower Pakistani women to become more engaged in entrepreneurship and other forms of economic activity. Why is this important?

Women make up half of the global economy yet in many countries around the world, including in Pakistan, they are unable to unleash their economic potential and that represents a net loss for job creation, investment, economic growth, and competitiveness. Of 149 economies, Pakistan ranks second to last in the World Economic Forum’s Gender Gap report, an annual ranking of countries’ economic competitiveness that measures gender parity in political and economic participation and access to healthcare among other development services. According to the World Bank, Pakistan also has among the lowest rates of women’s entrepreneurship in the world. Many companies that work in Pakistan and are affiliated with the Council—both U.S. and Pakistani companies—are committed to bringing more women into the workforce, both because it’s both good policy and good business. Further, countries that promote women’s economic empowerment are more stable, prosperous, and secure and women’s entrepreneurship is a critical lever to promote women’s economic opportunity.

What perspectives do you think women specifically bring to the world of business and entrepreneurship that may get overlooked when they are under-represented in these sectors?

First Round, a Venture Capital firm, issued a ten-year retrospective on their investments over the past decade and found that their investments in companies with at least one female founder outperformed companies with all male teams by 63%. A 2011 report conducted by Catalyst of Fortune 500 companies found that companies with a high number of women board members significantly outperformed those with no female directors. The diverse set of skills, experiences, and expertise women bring to the table clearly leads to profitability for companies—irrespective of the sector!

This year’s theme for International Women’s Day is “Balance for Better”. The theme focuses on innovative ways to advance gender-balance in areas across economic and social spheres. Examples include having gender-balanced boardrooms, gender-balanced classrooms, etc. In your opinion, what are the most important ways we can empower communities to work towards ensuring gender-balance globally today?

Government, civil society, and the private sector writ large have a role to play in fostering these conversations and already are leading the way in igniting conversations and programs regarding gender equality. Creating more platforms that bring different stakeholders together to break down barriers and catalyze momentum on women’s issues is essential. The U.S.-Pakistan Women’s Council, for instance, is a partnership between the State Department and Texas A&M that aims to provide a platform for government, civil society, and the private sector to advance gender equality in Pakistan. Our members—PepsiCo, Coca Cola, Engro, The Resource Group, Proctor and Gamble, S&P Global, Citigroup, and General Electric—have taken commitments to steward mentoring programs, supply chain and hiring diversity goals, to advance women’s entrepreneurship education, and to foster public-private dialogue on key barriers facing women and girls. The Council counts on the support of a range of leaders in the Diaspora, government, and civil society organizations and I am pleased that our roster of members will expand when we formally relaunch this month.

It matters that leaders in powerful institutions adopt gender balance as a priority and that certainly creates a ripple effect—through legislation, programs, funding, and policies. Ultimately, true change happens when individuals own the agenda so my immediate advice is always to model inclusivity and hold leaders accountable when they do not. The #metoo movement is a powerful testament to the power of people advocating for change.

Can you name a woman you encountered at MSFS (e.g. professor, classmate, mentor) who inspired you? Why did they inspire you?

Professor Carol Lancaster was a friend and mentor. She challenged me and all of her students to look at their engagement in foreign policy through the lens of ethics and to question more deeply why we were seeking to enter into the world of international affairs. She always had an open door and though she seemed very stern at first, she was such a kind and welcoming presence while I was at Georgetown and well into my career. I also deeply appreciated Deb Burand, who taught a course on social entrepreneurship. She was a mentor and was a source of support well after I graduated. Truthfully, I found intellectual inspiration from so many professors at Georgetown —both men and women—Professor Michael J. Green, Professor Andrew Natsios, Professor Victor Cha…there are too many to list!