To celebrate International Women’s Day on March 8th, all this week MSFS is highlighting women in our program’s community who strive to further gender equality and inclusion in their professional and personal lives. For today’s spotlight, we spoke with two MSFS faculty members, Ambassador Nancy McEldowney (Director of MSFS) and Professor Carla Koppell (GIWPS Distinguished Fellow), about their careers in international affairs and how they approach issues of gender difference and diversity and inclusion in their leadership roles at Georgetown. 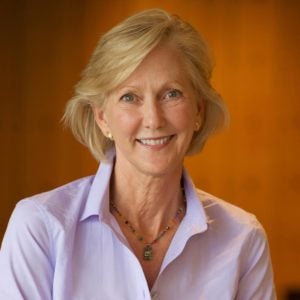 Ambassador Nancy McEldowney is the Director of the MSFS program. Prior to joining MSFS, she served as Director of the Foreign Service Institute (FSI) and Ambassador to the Republic of Bulgaria.Ambassador McEldowney also served as Interim President and Senior Vice President of the National Defense University, the U.S. Department of Defense’s national security university. She worked under President Clinton as Director of European Affairs on the White House National Security Council Staff. She also served as Principal Deputy Assistant Secretary in the Bureau of European and Eurasian Affairs, where she led the U.S. government engagement with NATO, the European Union, and the Organization for Security and Co-operation in Europe (OSCE). Ambassador McEldowney’s career as a foreign service officer included positions as U.S. Ambassador to the Republic of Bulgaria and as Chargé d’Affaires and Deputy Chief of Mission in Turkey and Azerbaijan. In addition to her Director responsibilities, Ambassador McEldowney teaches a course titled “Navigating Global Landscapes” at MSFS.

A paper published last year in Foreign Policy Analysis found that women in the Foreign Service are still under-represented in the class of officers eligible for appointment to ambassador. As a former U.S. Ambassador, why do you think this is? What can the Foreign Service do to support women to access senior positions?

Well, I think it is terrible, first of all. I am very disappointed to see that the number of women in senior positions has not risen more. That, I think, is down to a couple of things. One, there are women who self-select and choose not to take more demanding positions that would show their readiness for senior jobs because they are primary caregivers of children, primary caregivers of aging parents, and they don’t want to work in what can be a very stressful environment with lots of competition and lots of demand. But that is not the whole picture by any stretch.There needs to be concerted efforts to expand diversity and the way you do that is not just by bringing equal numbers of women, minorities, and under-represented groups in at the entry level. You also have to help them once they get in, mentor them, take care of them, and teach them not just the obvious stuff. Every culture has an unwritten code of conduct and you need people to help you with that kind of stuff.The third part is that women and other under-represented groups have to have role models in the senior leadership. The President and the Secretary of State need to appoint senior women who can run the organization with an eye to advancing diversity. There are a lot more women in the field of diplomacy and with greater numbers, I think, has come a realization that we have to talk about issues of gender and diversity across the board and that it is not a sign of weakness, it is a sign of strength.

What are the mentorship opportunities available to women going into diplomacy?

There are many women who are in the high levels of the mid-ranks and then in the senior ranks who are great mentors. What I fear is that mentorship is not as strong as it should be because the numbers of women in senior leadership is lower than it should be. People are overbooked. And they take the lead from the senior level. When I was at the State Department, Colin Powell was Secretary and he used to say every week that he expected me to mentor the people who worked for me and I thought, “Well, I got my marching orders from the Secretary of State!” I knew it was his priority and I made it my priority. Everybody works to incentive so I’m worried about that in the current administration.However, I’m also optimistic because this generation is smarter than mine was. They are super hardworking, they are switched on, and they self-advocate in a way that my generation did not.

How do you work to empower women (be they colleagues, students, guest speakers) at MSFS?

It’s a multi-pronged strategy and we start and end everything with our students. We work extra hard to find qualified female applicants for the program and give them the best possible chance that we can.When I make hiring decisions, if I can hire a qualified woman that is what I’m going to try to do. For every panel and every faculty hire, I constantly search for women. International affairs is not a field dominated by women, it is dominated by white men so we are constantly looking to bring more women and more diversity generally into the program by inviting panelists, guest speakers, etc. from different backgrounds.Every year, I have sessions for women students to talk to them about what their issues are. It’s important for them to feel like they have a platform and can voice their experiences. I can’t solve everything overnight but I don’t want anyone to ever feel that they haven’t been given an opportunity to speak their truth.

Do you have any advice for women looking to go into the field of diplomacy?

I will start with a message for all the women in MSFS and SFS: never sell yourself short. You are the future of the world. I want every woman to know how powerful they can be. That they can do great things in this world and can change things and make it a better place in very meaningful ways. If you start with that, everything else falls into place.For women entering diplomacy, I would say know your worth. Know your expertise, know your value, but also reach out to others, be a leader, and build a strong team. For those specifically going into diplomacy, it is a time of tremendous global change. It can be daunting. There are some very serious challenges out there but also such phenomenal opportunity. I think it is really such an exciting time to be going into diplomacy. 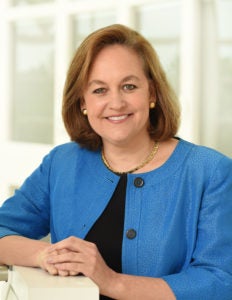 In your experience, what role do women play in fostering peace in communities around the world?

The body of evidence supporting the importance of women’s engagement in peacebuilding has dramatically strengthened in the past decade. We now know that peace accords are 35% more likely to endure at least fifteen years when women are involved in the negotiating process and we know that’s because women bring different perspectives and priorities to the negotiating table.Women also experience conflict differently and uniquely on the ground. They are often the ones keeping communities together, even as wars are underway, and that gives them a particular role in maintaining and re-establishing community norms after conflict as well. Too often, we are focused on women and children as the victims of conflict but they also have a very important influence and views on those conflicts, and how to chart the path forward. Women have different roles, different perspectives, different priorities, and we need to bring all of those voices to bear on conflicts that have endured too long in various locations globally.

You teach an MSFS course titled “Diversity and Inclusion in Conflict Resolution and Development”. What kind of conversations have you been having in that class?

The first thing I will say is that it is a pilot course. It doesn’t exist anywhere else and it’s the first run here at Georgetown. Our final projects are focused on Colombia, Yemen, the Democratic Republic of Congo, and Afghanistan. Many of the students have looked at issues in these countries at other times in their academic careers. However, almost all of them say that the issues we discuss in relation to diversity and inclusion never arose in their discussions of these countries elsewhere. I think it is adding a layer of analysis that is, frankly, fundamental to understanding the path forward in these countries. It says to analysts and policy makers that we can’t look at countries as monoliths. They are very heterogeneous societies and that if we are going to craft development and peacebuilding interventions that will really meet the needs of everybody in society we need to understand some of that heterogeneity going in.

Can you tell us a little bit about your work on the University Leadership Council on Diversity and Inclusion in International Affairs?

The University Leadership Council on Diversity and Inclusion in International Affairs was created as part of a wider project last fall which involves 17 universities from across the country. We’re discussing how to bring issues of diversity and inclusion into curricula around international affairs generally. Everything from work on security studies to development interventions, to advancing diplomacy and conflict resolution. The Council involves Deans in a conversation about how to bring these issues into the curriculum, how to create a culture of inclusion in schools, and also how to alter the composition of faculty and students within schools to better reflect the diversity of the globe.

On that point, how do you think academic institutions like Georgetown can be more inclusive without placing a burden to diversify on certain individuals and groups, be they women, people of color, first-generation students, and so on?

The issue of how you don’t instrumentalize representation within schools is a really important and difficult question. On the one hand, you don’t want an individual representing and speaking on behalf on an entire community of people. On the other hand, you don’t want to define or discuss the perspective and roles of different segments of a society without drawing on voices from that society. There’s not an easy answer to that question. A lot of it relates to creating a culture of inclusion, because the reality is if you have an environment where you’re able to elicit the perspectives of everyone in the room without them feeling uncomfortable or a sense of pressure, then you are much stronger for it as a learning institution.

How do you work to achieve that atmosphere in your own MSFS classroom?

There are a number of ways in which I think we can help people succeed in the classroom and feel embraced in the classroom. I, for example, have defined participation in my syllabus very explicitly to mean creating a culture in which everybody feels like they have an opportunity to participate. Participation is not defined simply as the number of times you speak up in class. Altering that definition, I think, provides a lot of space for enabling people to engage in conversations.

You’ve mentioned how you have worked to balance your professional and personal life. Can you talk a little bit more about that?

I’ve had an incredibly rich career and I feel fortunate to have that, but I will also say a big part of my life is also my family. A big part of my career has been balancing my professional endeavors with personal and family endeavors. I have three wonderful sons and I mention that for two reasons. First, I think a lot of women are figuring out how to balance their commitment to family and spouse and children with their commitment to their career and I want everyone to know that you can do it. And the second reason is that I’m firmly committed to raising three gender sensitive male leaders. My hope is that they can help us chart a path to more inclusive societies around the world.Responses have been edited for clarity and brevity.