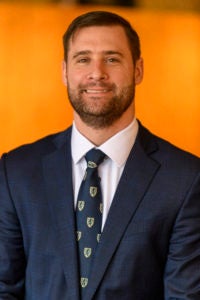 On Friday, November 30th, MSFS student Josh Parsons (MSFS ‘20) was promoted to the rank of Lieutenant Commander in the US Navy Reserves. Josh’s Oath of Office was administered by fellow MSFS student U.S. Army Major Nicholas Frazier (MSFS ‘19) in the presence of MSFS students, faculty, and staff.

Prior to starting the MSFS program in August 2018, Josh served as a program analyst for the Commandant at the Eisenhower School for National Security and Resource Strategy. He led the naval ROTC program at Yale University, served in an operational squadron in Jacksonville, FL, and completed a tour on an aircraft carrier at the Naval Station Norfolk in Virginia. Josh is currently attached to the naval reserve unit at the National Defense University.

We talked to Josh about his military experience, his goals at MSFS, and why he chose to hold his promotion ceremony at MSFS.

Tell us a bit about your military background. What service are you in and where have you served?

I originally enlisted in the military as a nuclear power plant operator. However, I soon realized that while I was naturally able to work in science, math, and engineering, it didn’t stimulate me. So — while working as an instructor in Nuclear Power School — I decided to apply to and was accepted for the Naval Academy.

After graduating from the Naval Academy, I was fortunate enough to begin pilot training. My first operational squadron was in Jacksonville, FL where I flew the P-3C Orion. The Orion was a land-based aircraft originally designed to look for submarines but after the Cold War it was mostly used to assist in intelligence, surveillance, and reconnaissance operations. Later, I worked at Yale, restarting their naval ROTC program with a former classmate from the Naval Academy. After that, I headed out to Norfolk and served a tour on an aircraft carrier where I drove the ship and scheduled, well, just about everything it did!

My final active duty tour was at the Eisenhower School for National Security and Resource Strategy where I worked for a short time for the Commandant as a program analyst. I transitioned from the active to the reserve component in April of 2018 and I am now at the naval reserve unit at the National Defense University where I assist with the planning and execution of a course they deliver on joint military operations

What is your most memorable military experience?

One of my most memorable military experiences was, oddly enough, not very military at all! While I was at Yale I was asked to provide and lead a flag detail for the Inauguration of incoming Yale President, Peter Salovey. Yale has had fewer presidents than the United States, and they have a penchant for drama that rivals that of the military. The ceremony was a pretty big deal for them and being invited to take part was a large honor for a freshly reinstated military program.

Unfortunately, shortly before the Inauguration was set to happen, the Navy banned all military units from participating in ceremonial events. Fearing we would breach the trust of the Yale administration, I wrote a letter decrying this decision to a friend who works as a public affairs officer. My letter somehow made it to the desk of someone high up enough to reverse the decision and we were able to participate fully in the ceremony after all.This event always sticks in my mind because it was a great example of how the military can be heavy-handed, yet responsive when the stakes are high enough.

Why did you choose the MSFS program and how has your military experience helped you in your studies here?

My military experience instilled in me a significant amount of resilience and perspective. The MSFS program is extremely challenging and rewarding, and the challenges and perspective I have gained from my military career helped me to remain resilient in the face of the program’s demands so I can focus on the rewarding aspects of the program.

I chose the program because of the size of our cohort. In the short and hectic months I’ve spent here, I already know my classmates very well and I am humbled to be counted amongst them. My classmates make it all worth it. Plus, there are a lot of events with free food all over campus!

Why did you choose to have your promotion ceremony at MSFS?

In an age of growing support for exclusionary ideologies like isolationism and nationalism, along with the leaders who espouse them, I chose to conduct my promotion ceremony amongst my classmates to highlight a really important portion of the ceremony to them. In the United States military, we do not swear an oath of allegiance to a nation, a flag, or a person, but to a set of ideals enshrined within our constitution. While they have not always been universally applied in our country and abroad, we swear to strive toward that end, and this oath guides the orders we follow. I wanted my fellow classmates to see this important aspect of the military’s organizational culture in hopes that it might inform the interactions with our military they could have as future organizational leaders.

What do you most want your non-military classmates to know about military service?

I don’t want them to think that military service is all that exceptional. Don’t get me wrong, there are many people in the military who do exceptional things — I’m not one of them — but we don’t really want to be seen as exceptional: that’s not why we serve. To me, service is service, and a teacher or social worker can provide as much, or more, service to their nation as a member of its military. We all play our roles and we are all important in ensuring society functions appropriately. More importantly, I want my classmates to understand the military just a little bit better than they think and maybe break down some of the stereotypes that might exist. Through that small contribution, I hope to help bridge the civil-military divide in order to foster a better understanding and appreciation for the servicemembers that carry out the form of diplomacy we call war. Perhaps a better understanding of the military might inform policymakers to be as reluctant to call for war as many of us servicemembers are.

What are your career plans and how are you using your time at MSFS to work toward these?

I am not absolutely certain what my specific career plans are just yet. I’ve figured out that I want to work in international relations “when I grow up”, but I am still not exactly sure how I will do that. It’s a cliche, but I hope to find myself in a role in which I feel good about what I’ve done at the end of the day. Beyond that, I hope they have nitro cold brew coffee on tap like they do at my wife’s work! In the short term, though, I’ve been fortunate enough to accept a summer internship with the Department of State to see if working at that organization is something I would like to pursue in parallel to my Navy Reserve career in the future.